So you've decided to give this kayak fishing craze a shot. Your first order of business is selecting a kayak. In this article we'll look at all of the factors to consider when selecting your kayak.

The first thing you need to do is envision what you want your kayak to be. Do you want a lot of electronics and accessories? Are you more concerned with stability or speed? Is storage or transportation an issue? What's your budget? These are all things to consider before purchasing your first fishing kayak.  The sit-on-tops (SOT) will usually allow more mounting options for any number of accessories you may want, are safer, and are generally your best choice for fishing. Depending on water contact restrictions a sit inside kayak may be perfect for you. Though not as customizeable as a SOT, sit inside kayaks will get you out on the water. Mailbu Kayaks, Jackson Kayak, and Wilderness Systems offer multiple chooses that would make suitable fishing platforms.

Keep in mind that just like cars, boats, and airplanes each manufacturer makes their kayaks a little bit differently than the next. One thing you want to make sure of is that whichever kayak you're interested in has been roto-molded. In this process (over-simplified) melted plastic is poured into a hollow mold and then spun around so that the plastic sticks to all sides of the mold and is then removed so that it is all one piece. Keep in mind with a mostly flat sided kayak it's necessary for the manufacturer to use a thicker plastic because a square will hold less force then a circle. Conversely, a round sided kayak can use thinner plastic which will influence the overall weight of the kayak. Some cheaper brands are made by sticking two separate halves together which can result in pinhole leaks and cracks in surprisingly short time.

Once you've determined the quality of the particular brand of interest, check out the overall design of their different models. A longer and narrower kayak will usually be faster but not as stable as a wider boat. This area of kayaks is a trade off. The fastest kayak will not be the most stable, and vice versa. The design of the hull itself can have some influence on this so check out the shape of the hull. The keel design, whether single or double, will greatly improve stability while a round bottom has the least resistance and helps speed.

A quick disclaimer on speed and stability before we get too carried away; there are two types of stability: Primary and Secondary. Primary Stability is how stable the kayak feels as you're sitting in it under normal circumstances like sitting in a chair at the kitchen table. This will have excellent primary stability and doesn't feel like it's going to tip over at any given moment. Secondary Stability is what it actually takes to tip the kayak over. So if you lean back in that chair far enough you'll get to a point of no return where you're hitting the floor. That chair would have poor Secondary Stability. Some kayaks feel very stable but get to a point of no return where they're flipping. Others feel not quite as stable but take a lot more to actually flip them over. Most people prefer high primary stability so that you have a stable platform for fishing. Often times you can find a kayak with such high Primary Stability it will be very difficult to even get to the point where Secondary Stability is a concern.

As for speed, we're not talking about winning any races, it's just the amount of effort it takes to move the kayak through the water. A faster kayak is easier to paddle and doesn't result in as much fatigue throughout the day. A long and narrow kayak, over 13 feet, will usually give you the most amount of speed. And a little extra speed can come in handy now and then when you're chasing down birds, boiling fish, or you want to get to the spot quickly.

Now think about what accessories you want to add to the kayak. Different designs will have more flat surfaces than others, which can be very useful for mounting accessories. If you want flushmount rodholders make sure there are areas to install them. Have the finished product in your head and make sure all of your plans are feasible with the kayak you intend to purchase. A lot of people skip this step and find out later that there's no room for flushmount rodholders or nowhere to put a bait tank and they end up selling the kayak and starting over, or giving up on the idea altogether.

Advertised specifications are worth noting as well; specifically weight capacity, length, width, and weight of the kayak. These will all play a role in making the right decision when taking into consideration things like storage, transporting, launching, and the overall speed and stability of the kayak.  Weight capacity and hull design can be a concern for larger paddlers or anglers who plan on fishing larger bodies of freshwater or coming home with a kayak full of yellowtail. Beyond these general considerations, many manufacturers today have realized the market for kayak fishing and are designing specialized fishing features into their kayaks.

Jackson Kayak has introduced the Kraken series of kayaks to handle your big water needs.  With its fast and stable hull along with numerous angler friendly features, the Kraken will get the job done. With 2 lengths to choice from, these are going to be a popular big water/offshore kayak.

Malibu Kayaks are some of the only kayaks that have always been designed from the ground up with fishing in mind. You'll find plenty of storage space, high weight capacity and well thought out designs to allow for a multitude of accessories.  Malibu Kayaks has integrated a bait tank system and transducer mounting location on their X-Factor and Stealth model kayaks. With most of So Cal's hardcore kayak fishermen sitting in these boats it's hard to argue with their decision.

Native Watercraft have developed the Propel Drive System which is available in the Slayer Propel series of kayaks. This system will allow the angler to fish hands free while propelling themselves through the water either forward or in reverse.

Old Towne Kayak has come out with the Predator XL which has the option for 3 different configurations.  A Minn Kota Trolling Motor center pod capable of producing speeds up to 6mph!  A second center pod option which is designed as a large storage container.  The third option is a center pod plug that creates a flat footwell for a massive amount of standing room.

Wilderness Systems has introduced the A.T.A.K. and Thresher series of kayaks.  The A.T.A.K. is quick and very stable kayak designed to get you there and let you stand up and fish with ease.  It also comes equipped with the Air Pro Max seat that allows for Hi/Low seating positions and is very comfortable.  The Thresher was designed to get you through the surf and rough water fast.  This kayak has big water on its mind.  A self contained front hatch, large hinged center hatch, and the removable Flex Pod OS which will house your fishfinder, battery, and transducer are features on both of these models.

Hobie has introduced the Pro Angler which is a very stable kayak that will handle all size anglers.  Coupled with the patented "Mirage Drive" pedal system, they are sure to be a very popular fishing kayak.

One of the more popular fishing kayaks besides Hobie are Malibu Kayaks. These are some of the only kayaks that have always been designed from the ground up with fishing in mind. You'll find plenty of storage space, high weight capacity and well thought out designs to allow for a multitude of accessories.  The Stealth models and the X-Factor both feature a built in livewell that just needs to be plumbed and your ready to fish. With most of So Cal's hardcore kayak fishermen sitting in these boats it's hard to argue with their decision.

Most of these kayaks can be seen at many beach launches in this area, San Diego. Spending some time at the local launch is a great way to get feedback from paddlers and pedalers alike, that are out there using their kayaks. This will also give you an opportunity to see what kayaks are the most common in your area, which can aid in your decision. 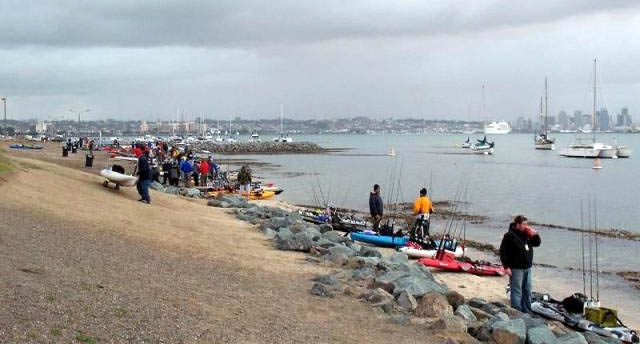 Most local dealers will allow a test paddle/pedal free of charge. It is highly recommended to take advantage of this offer and check out a few models first hand. Nothing compares to experiencing how a particular kayak feels to you. Choosing a kayak that is right for you is the most important thing to remember. There is no perfect kayak, but with some research and homework you should be able to find the kayak that's perfect for you.