Every angler has one or two fish that always seem to elude them. For several years, I targeted White Sea Bass but they always managed to sneak past me. I've caught more sub-legal White Sea Bass than I care to recall. One of my more heartbreaking encounters with this ghost happened one day in the Point Loma Kelp Forest located just North of San Diego Bay in Southern California.

My friend Bryan and I were pitching Trix Jetty Worms into the kelp canopy looking for big calico bass. The Jetty Worm is vibrant colored weedless jig with a high action trailer designed to withstand the abuse of bruiser calico bass and lingcod. During one our drifts we kept noticing big splashes in the distance. Some predator was pushing bait to the surface rapidly, causing the bait to jump out the water. I made my way over to the commotion and glided in so that I wouldn't spook the fish. I found a nice alleyway in the kelp and made a nice cast towards the nervous bait. As I retrieved my bait I noticed a dark shadow beneath the kelp canopy and watched (in total shock) as 40-50 lb White Sea Bass inhaled my bait and just as quickly spit it back out. I never set the hook - I never had a chance. 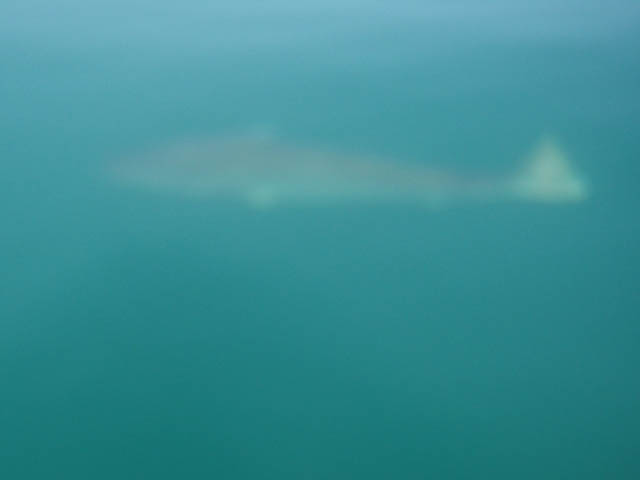 My never encounter would be very different.

I've always enjoyed fishing in tournaments. I thrive on the competition and enjoy hearing the many tales of triumph and defeat. Not to mention the BBQs that always follows immediately afterward. May 17th, 2007 was no different. Big Water's Edge was hosting their West Coast Whoppers 2007/08 Kickoff tournament. 50+ competitors waited patiently at the water's edge for the shotgun start. I pushed through the surf and made my way out to the kelp to make bait and began trolling. I caught 7 or 8 greenback mackerel and starting trolling out to sea.

A light fog bank had rolled in making it difficult to see and there was a nasty red tide causing the water to look like coffee. My friend Dave called me on the radio and let me know he had landed a nice fish. I made my way towards him and my bait got picked up. After one good run, I threw the reel into gear, set the hook and POP! Bummers. I quickly rebaited and got picked up almost immediately. I waited a little longer on this fish, and got a real nice hook set. A few minutes later, I sunk my gaff into this beautiful fish. 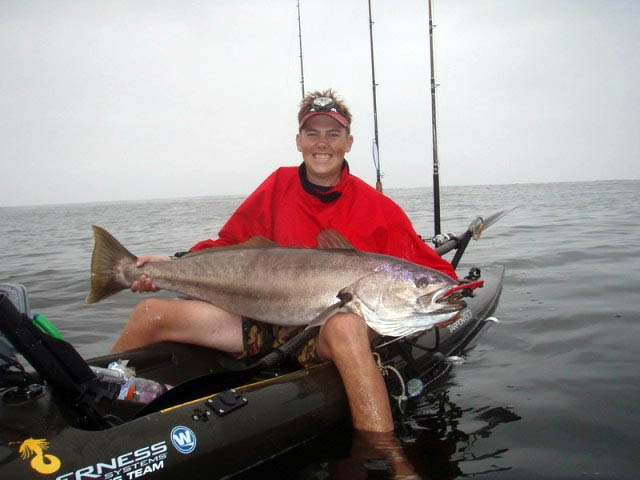