Many kayak fishermen have become so dependant on live bait that they have overlooked one of the best fishing weapons available – the yo-yo iron.  I have to admit that it’s hard to compete with a slimy, wiggly mackerel, but quite often yellowtail, especially the big wintertime La Jolla homeguards, will strike an iron while leaving the bait untouched. 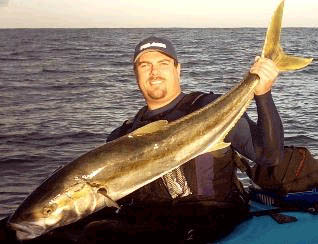 La Jolla in December 2003 was a perfect example.  I launched after dawn with one rod and paddled out to an area in 90 ft of water where a group of good kayak fisherman were milling around.  They were slow trolling plugs and greenies, casting fish traps and crocodiles, and bounce balling mackerel for halibut.  Two hours later my Salas 6x Jr. in blue & white had caught two 20# class yellowtail. Nobody else was getting bit.

For whatever reason, the yellows swam by all those live baits and plastics for a small hunk of fast moving metal.

I’ve caught >90% of my LJ yellows on yo-yo iron.  It’s something about fooling a fish to eat an artificial lure that got me hooked (har har).  Now I do it because it just plain works.  Sometimes the success of yo-yo fishing seems random and unexplainable, but the real reasons behind why it works may not be so mysterious.

Here are a few techniques and observations that might make you consider spending more time chuckin’ iron:

- In my opinion, yo-yo fishing is playing the percentages.  That iron is quickly covering the entire water column and much more territory while the guy next to you soaking live bait is confined to a small area.

- Although yo-yo fishing requires more casting and cranking, you don’t have to spend time finding bait, catching bait, hooking bait, soaking bait, replenishing bait, cleaning eel grass off the bait, and finding a good bait that swims right.  The iron will get you through the entire day and stay away from sea lions too!

Iron Selection and Color:  A former sport boat captain told me “if you don’t catch yellows on the blue/white Salas 6x Jr., then they are not there." Boy has that been true for La Jolla.

I often see guys changing iron styles and colors after every couple casts.  I don’t think that way.  I fish the B/W or B/W w/ mack pattern Salas 100% of the time, because I have confidence in its fish catching ability.  Other models that work well are the Ironman jigs in #3 and #5, Tady 9 and Tady 4/0.  That B/W w/ mack pattern Salas 6X Jr. was responsible for a lot of WCW submissions last year.

As for color, I struggle with this one.  A lot of people say “match the hatch” meaning that the iron color should match the color of the bait supply in the area.  If that were true, then why was the B/W Salas so successful during the infamous Dec. ’05 squid bite?  On a few mornings, the B/W Salas caught more fish than live squid!  It’s the action that catches the fish.

- Gear:  This is very debatable but my personal preference and successhas come from 4.9:1 gear ratio reels.  Although 6:1 reels were specifically designed for yo-yoing, for some reason the fast retrieve of a Salas with 4:9:1 Diawa Sealine-X reel is a deadly combination for yellowtail.

I’ve tried 6:1’s like the Shimano Toriums and Trinidads and the action of my Salas’s and Iron Man’s go to crap; they just twist and don’t have that seductive side to side motion with an occasional kick that I’m looking for.  Another side note on those Diawa’s:  Turners had them for $70 at the show.  In my opinion, these reels are hands down the best yo-yo reels for the yak because of castability, drag reliability, and longevity.  I’m still fishing the same XHV50 from the last 3 years, no maintenance whatsoever.

For yo-yoing I like shorter, stouter rods.  You don’t need a long rod for surface iron casting distance, you want backbone and pulling power to keep those deep yellows from finding trouble.  I fish a 6’ 40-60# rated rod with 40# mono.  I usually match the line to the middle of the rod weight, but for yo-yoing I want extra beef to slam the hook home and pull fish off the bottom quickly before it finds the bull kelp or lobster trap.  I see lot’s of guys fishing rods that make the weight of the iron look like a 30# yellow.  If that’s the case, the rod is way too soft and you will miss hooksets and get smoked into trouble.

For line, I like straight 40# mono just because the knots are straightforward and I know the maximum amount of pressure I can apply before breakage.  Yellows, unlike white sea bass, have hard mouths and jaws so you can use treble hooks and pull really hard without pulling hooks.  I also like the heavier line because the fish aren’t line shy with yoyo iron and because I’ m very jealous of Larry’s and Arne’s 50# class fish.  I want one too!

- Presentation: This is where the little things seem to make a difference.  Yo-yoing by definition means dropping the lure to the bottom and retrieving as fast as possible.  Some guys may drop down, jig it up and down on the bottom a few times, retrieve half way, jig it again, drop it, jig it, on and on and so on.  My success has come from one style: cast as far as possible, let it sink to the bottom, and then retrieve all the way back to the rod tip.  Sounds very simple and it is, but a few little things have increased my odds of success.

The cast: For some reason, long distance casts up current get more bites.  I don’t know why.   Is it because bait swims down current, predators swim up current, glare, etc, I’m not too sure?   I theorize that casting up current means you are drifting further away from your iron faster, meaning you have more line off the reel and a more horizontal retrieve angle.  Both of those factors improve your chances because you’re covering more water and the Salas swims very well side to side. 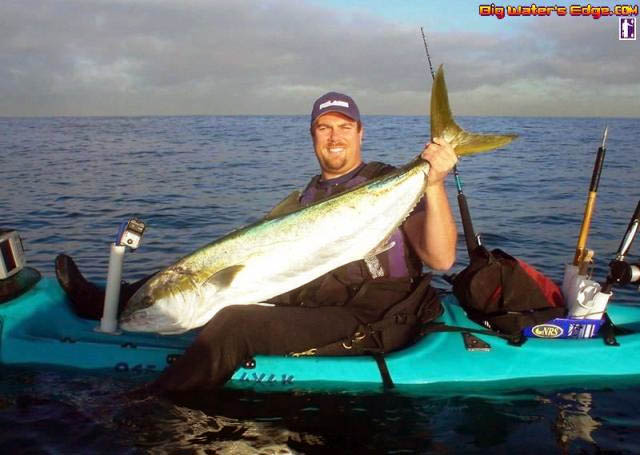 The sink: Although less than 10% of my yellowtail have bit on the sink, I have caught some of my bigger models this way.  Hooking fish on the sink can be tricky and takes more concentration than hooking fish on the retrieve.  I think it’s important to point the rod at the iron while it’s sinking and keep your thumb lightly on the spool so you have control and feel of the lure.  The thumb on the spool is important because you can detect a bite (either the line goes slack or pays out at an inconsistent pace).  Yellowtail often grab iron from the side and may not swallow the lure, it won’t take long for them to figure out it’s metal, so you have to detect the bite quickly to have a chance at hookset.

The retrieve: If the jig hits the bottom without a bite, put the reel in gear and crank.  Same rules apply for hookset.  Point the rod at the iron and when the line comes tight (oh what a feeling!), wind through the bite to set the hook.  Be ready as most wintertime bites come a few cranks off the bottom.  If the fish comes off, I’ve had more success continuing to crank, rather than free-spooling, for re-bites.  The first WCW submission of 2004 was that scenario.  Line came tight a few cranks off the bottom, a single headshake spit the hook, and then about 10 cranks later I got the re-bite which resulted in 31#’s of glory!

I set the hook with iron by cranking, not swinging.  Too many guys detect a bite and swing at slack line and the fish spits the hook.  Cranking 40# line can really get a good hookset.   Having the rod pointed at the fish means you are getting the line tight directly to the reel without any bend in the rod.  Once the fish starts smoking line off the reel, you can lift the rod and hang on. 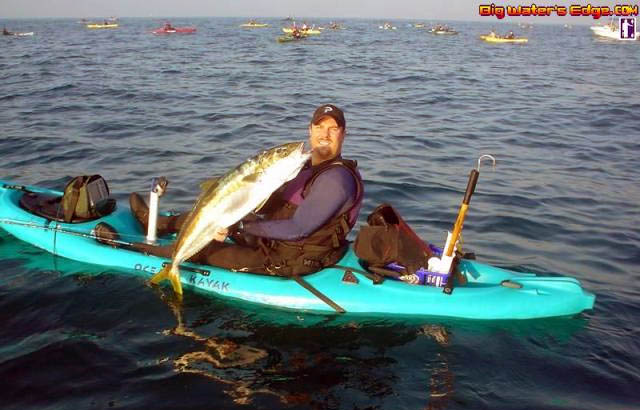 I like cranking the lure all the way in for a few reasons: 1) it covers the entire water column.  I’ ve hooked wintertime fish ¾ of the way up.  Not sure if they followed from the bottom or were mid column cruising.  2) You can calibrate your retrieve speed when the iron gets in sight.  I do this a lot to make sure the iron is swimming properly.  I’d say about 70% of my Salas swim correctly, the others don’t.  When you find one that gets bit, mark it with red mark and take care of it.  I had one magic Salas that caught 7 yellows in December.  The treble ended up mangled and bent to crap, but it just got bit really well.  3) If it’s running too fast and spinning, you can let it untwist out of the water before re-casting.  If you only retrieve your iron half way and drop it, and it’s spinning, you are wasting your time and creating more twist.

- Fish Patterns:  My favorite topic and I think all of us have our theories and study this a lot.   There definitely seems to be winter trends or patterns that hold for days/weeks at a time.  This site is a great resource for seeing patterns, but nothing can beat time on the water.  Once you see patterns arising, you can shift work schedules, dates, etc to be on the spot at the productive time.  Here are some examples:

Feb’04:  Lobster pots were removed from the January spot and the bite moved about 200 yds SW.  Bite time was 9am.  Saturday Feb. 7th there were 80 guys there at 7am.  At 8:45am the birds piled up outside and 74 guys went jumbo mackerel fishing and deserted the kill zone.  At 9am the fish came through right on schedule and all 6 guys that stayed hooked or caught a fish.

Jan ’05: The area wasn’t so defined, but 8am-9am was the time.  General location was 110- 120’ of water past the hotel where you could just see Point Loma extending outside Bird Rock.  There were about 5 lobster traps there.

Dec ’05:  Who can forget the “December Spot.”  All you wanted for two weeks from 6:30am to 8am daily.  If you didn’t want to make squid you could get there at 6:30am and find your fishing lane, and then stop fishing at 8am and paddle in.

Identifying these trends gave me the confidence to stick it out in certain areas where others would have moved on.  Sticking it out paid off!

I hope you can use any of this information to get you in the right place at the right time with the right approach to feel those bursting runs, pounding headshakes and see that bright yellow stripe and tail at color, ready for gaff. 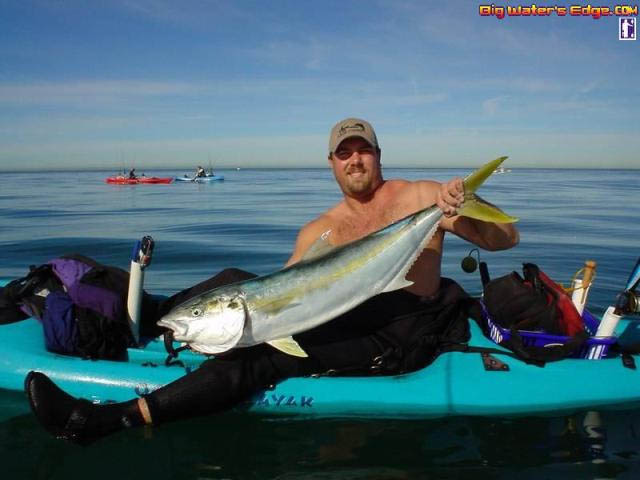