Many seasoned anglers in California have yet to catch a legal sized white seabass.  Many seasoned anglers in California have yet to try kayak fishing.  Coincidence?  Doubtful.  There is no fish in Southern California more ideally suited for targeting from a kayak than the white seabass.  They are known to inhabit the thickest, most dense, prop fouling kelp forest they can find which happens to act as a natural safe zone from boaters.  Freedivers will tell you that they are incredibly sensitive to noise and aware of their surroundings.  Just getting close enough to take a shot at one is an accomplishment in itself.  Got the outboard idling, or the generator running?  Maybe the yellowtail are biting.  No problem for the silent and slim profiled kayak angler.  With a little know-how and some time on the water, you too can take advantage of this amazing fishery. 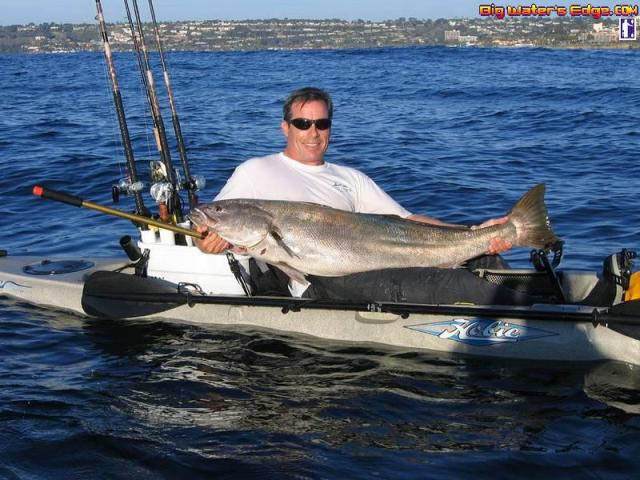 White seabass are arguably one of the best tasting fish that Southern California has to offer.  With a taste similar to halibut it is no surprise that these are one of the most sought after species not only for kayak fishermen but all fishermen in the area.  The availability of these fish has drastically increased in the last few years thanks in large part to the efforts of the Hubbs-Seaworld Research Institute who have been raising and releasing thousands of white seabass into the wild. The addition of stricter regulations on commercial fishing and gillnetting further helped the rebound of this awesome sport fish.  While some of the standard So Cal kayak fishing techniques apply to white seabass fishing, there are some variations that can greatly improve your chance at landing one of these elusive croakers.

Often referred to as the “white ghost” the white seabass is a very temperamental species.  They seem to show up most prevalently when squid are in the area, and a fresh dead or live squid is probably the most effective bait for targeting them.  Scientists know very little about their habits during much of the year and from a fishing perspective we see catch rates increase in spring and fall and virtually disappear for months at a time.  It is speculated that the fish follow the squid into deep water during these periods, but for fishermen we are “forced” to target species such as yellowtail or halibut in their absence.

Even if there are seabass in the area, most of the time they are very much reliant on moon phase, tides, time of day and other environmental factors to get in a feeding mood.  They are also very sensitive to noise, which is why the stealth of a kayak can be deadly on these fish.  Dawn and dusk are generally prime feeding times as the fish slowly cruise through the kelp stringers and then quickly ambush their prey.  As soon as the sun starts to turn orange in the evening, head to the kelp.  Likewise, grey light in the morning before the sun comes up is prime time.  They will patrol all depths of the water column so a variety of rigs can be effective. 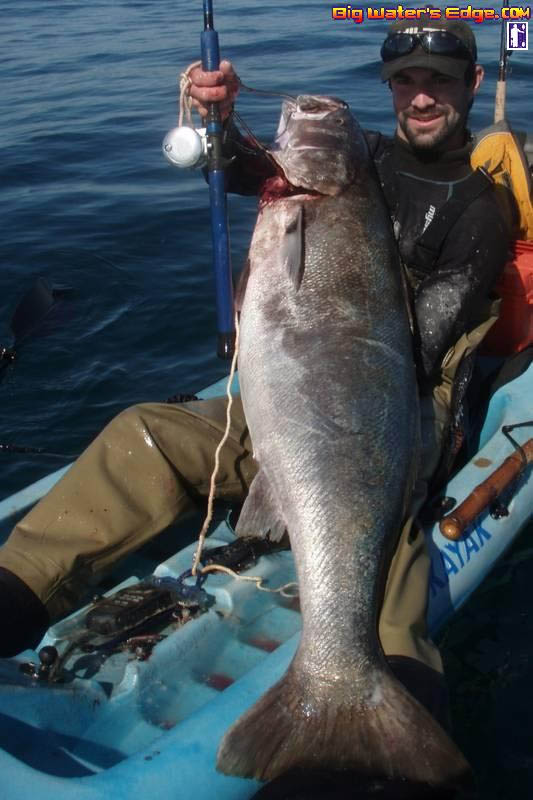 When catching mackerel for bait, don’t toss back those 12” long green backs.  It seems white seabass key on the larger baits, just make sure your hook is big enough to have a decent amount of hook point exposed.  Trolling along the edge of the kelp line with the standard flylined mackerel (or live squid if available), or 2oz egg sinker setup will result in the occasional white seabass hookup.  Another effective method is slowly drifting further inside the kelp with either a flylined bait, or a dropper loop setup on the bottom.  If the current is particularly strong the flylined bait on the surface may weave between the kelp stringers more easily than the bottom dragging dropper loop.  Fluorocarbon is a big bonus when targeting white seabass as they can be very particular when feeding.  The usual spectra mainline with fluorocarbon leader is an excellent choice.

Some artificial lures have proven effective at times, but live bait is preferred if possible.  Heavy irons jigged on the bottom or deadsticked (left with no movement) can work at times, especially if they’re tipped with a fresh dead squid.  Try a white colored jig with a red squiggle toward one end.  Large swimbaits such as the 5” or 6” Big Hammer can also work quite well, especially at night.  For an extra attractant try adding a small rattle inside the tail of the swimbait.  Rainbow Trout color seems to be the most effective.  Use a heavy jig head and do a slow and steady straight retrieve, covering all columns of the water.  First cast start reeling immediately, second cast let it sink 5 seconds before reeling, third cast wait 10 seconds, etc.

Not a particularly powerful swimmer, the white seabass reserves its power for short ambushing strikes.  Once hooked they will make a few very strong runs and eventually tire themselves out and often end up floating upside down by the end of the fight, waiting for the gaff.  They are also notorious for strong headshakes which can result in the hook pulling out if adequate pressure is not maintained.  Somewhat heavy line should still be used as they do possess the ability to bury themselves in the nearest kelp stringer.  50 or 65lb spectra mainline and 5 to 6 feet of 25 or 30lb fluorocarbon leader is acceptable.  If targeting white seabass exclusively a bigger hook is preferred as they have a very soft mouth and smaller wire hooks can easily tear out.  A 4/0 or 5/0 hook is not too big, especially if the bait you’re using is on the larger side.  Don’t go much below a 2/0 however.

White seabass have made an incredible recovery in the last few years.  What was once degraded to a once in a lifetime catch is now back to a commonly targeted species in our area.  The strong fight and delicious fillets make white seabass a personal favorite and as kayak fishermen we can do our part to keep only what we can eat and ensure that white seabass continue to re-gain strength in our fisheries. 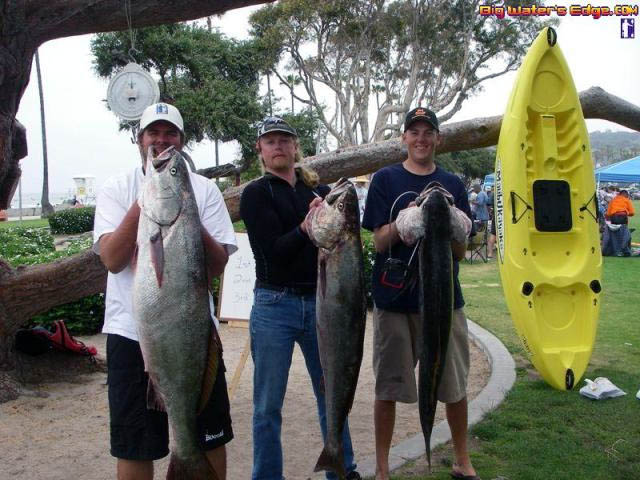