My bait tank is full of swirling, splashing Mackerel desperately trying to escape.

I drop one back and slowly start paddling my way up the kelp line. A few moments later the reel's clicker makes a couple weak clicks and the rod tip bounces around from what has become a decidedly nervous bait. As I pull the rod from the holder a series of short, sharper runs follow. While releasing the clicker, I lightly place my thumb on the spool until line is flowing at a steady pace. I engage the reel and allow the line to come tight before taking a swing. The rod quickly bends and nearly places the tip in the water.

The sight and feel of line being pulled against the drag has my heart racing. Water slaps the hull as this huge unstoppable fish tows the kayak. That powerful fan of a tail continues to pull, looking back it seems I've traveled 100 yards or more. By exercising the now familiar pump and reel, I slowly get on top of the fish. Just when my line is straight up and down another run spiraling downward followed by another and another. 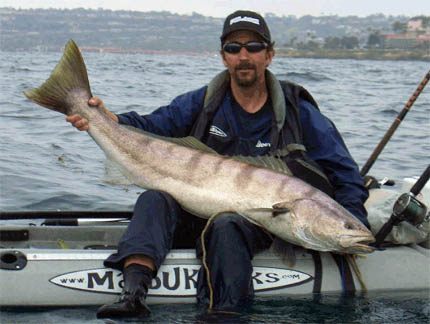 Then the task becomes more like a tug of war with the fish's weight, a swish of the tail or shaking of the head at one end and me at the other. Finally on the surface, nearly half the length of the kayak, I nervously gaff this enormous, silvery giant that I've somehow triumphed over and can't help but let out a loud "WOOOHOOO!

Small surf and its close proximity to prime fishing grounds make La Jolla Shores an ideal beach launch for kayaks as well as small skiffs. On any weekday I would normally be pleasantly surprised to find another kayak fisherman making ready to launch. This particular weekday morning in early April, I find a dozen trucks on the beach, kayaks unloaded, rigging up by the light of a flashlight or headlamp. As much as some would like it kept quiet, the word is out. The white Seabass are here, they are biting and, oh yeah, some are big!

While Catalina Island and other hotspots to the north rely heavily on live Squid to bag the giant Croakers. Unique to La Jolla is how readily the WSB strike fin baits, Mackerel in particular. Also unique is that a very large percentage of the catch is taken from kayaks. It has been speculated that the silent moving kayak does not spook these wary fish and that the slow trolling presents live bait more naturally. I also believe that not only is any deterrent lacking, but also that like the powerboat's prop wash raises offshore species, the more subtle swirl of the paddle through the water entices these fish in a similar way. They are drawn to investigate the possibility of feeding taking place.

The most common method for targeting La Jolla WSB starts with making bait. Jigging a Sabiki rig with a 1-2 oz. torpedo sinker usually yields good results. Look for coves or pockets along the kelp edge. Bait usually congregates around the thermocline, in the Spring that is usually 10-15 feet down. Spanish Mackerel are the most abundant bait and work very well. The Greenback Mackerel although less abundant arouses more confidence as a bait, perhaps the Greenback's erratic and lively swimming make it more easily noticed by it's prey. Sometimes Sardines can be caught, usually casting at a surfacing school. Unfortunately Sardines don't fare as well in some smaller tanks with inadequate flow, but a lively one is not likely to be ignored.

Tackle is somewhat of a personal preference. Heavier line and a stouter rod may help turn the bigger fish that are prone to head for the kelp but lighter line and a soft tipped rod absorbs the headshakes and may keep the hook from tearing out of the croaker's soft mouth. Many times the hook will fall from the mouth of a gaffed fish as it is raised from the water, a testament to never allowing slack line. Circle hooks and live bait hooks are both used and each have their following. Bait is usually fly lined, nose hooked, and slow trolled on a long line and periodically soaked. If you choose to run a second line it should be run shorter or weighted to avoid tangles. Variety is a good idea and can help you cover more area.

Live bait seems to work best, but bigger Fish Traps can be trolled and cast along the kelp as mwell as Krocodiles and Irons in Mackerel patterns. Trolling Rapala CD14s or 18s or Yozuri Hydro-Mags can also produce results.

Not an incredibly fast swimmer, the WSB relies on ambushing bait along the kelp or using its lateral line in low visibility water and also being opportunistic on its prey. The pelagic red crab is an easy meal and I believe their influx greatly contributes to the amount of WSB that congregate along La Jolla. As the current sweeps the red crab through the kelp forest, they latch on to the stringers. Divers have told me that the WSB pick them off kelp stringers like tomatoes from the vine.

Although sometimes seen as a nuisance, barracuda are a good sign. The WSB will feed on the wounded baits the barracuda have slashed. More than once, I have witnessed how a WSB will eat wounded bait that is tossed back out. If you come upon an area holding bait, time can be well spent soaking a Mac, while you toss a F/T or iron. Barracuda, Bass or even Yellowtail can keep you very busy, while waiting for that big hookup. When you are stationary that fly lined bait will slowly settle deeper in the water column. To raise it and instill some activity paddle a few strokes every so often. An obvious current slick is another good area to soak your bait or slow troll parallel to. Often holding bait these "roads" harbor wondering game fish as well. I don't think there can ever be too much bait in the water. When a predator fish comes upon a school of bait, in defense the school acts and moves as one. Your bait dragging the hook and line will be singled out, viewed as a weaker, easier meal.

Most fish are hooked very close to the kelp. Smaller keepers of around 10-20 lbs are definitely more user friendly, as a whole they tend to run away from the kelp and usually are incapable of running deep enough to get you in trouble. Your biggest threat may be attracting the attention of a Sea lion. The bigger trophies definitely have to be played very close to the limits of your tackle. They seem to have greater survival instincts, running headlong into the kelp and I've seen as many lost as I have seen landed.

When things get crowded out there, finding your own quiet area is a smart bet. WSB can and often are caught well off the kelp along the ridge that drops into the La Jolla canyon. If using a meter following the 150 foot contour running East to West can do the job and when you hook up out there, unless there are lobster buoy lines to contend with, you have nothing but time.

The presence of these spectacular and prized fish will certainly tempt the inexperienced to venture out. Just remember, you can run into trouble even before you have cleared the surf zone. Never go alone and try to go with someone who is experienced.

If the trend of the last few years continues, another stellar season is just getting underway. Late April through mid-may seems to be the peak season, but the big croakers should continue to bite throughout the Summer months. Which leaves just one question: What will you be serving with those gourmet fillets?