Is there a more perfect fish to target from a kayak than yellowtail?  Certainly not on the West Coast.  They pull incredibly hard, they are often within paddling distance and they make excellent table fare.  As a member of the jack and pompano family, powerful fighting ability is in their blood and one of their favorite snacks just happens to be the most readily available bait for kayak fishermen; live mackerel.

Understanding any species of fish is a necessity in order to successfully target them.  Let’s take a look at what makes a yellowtail a yellowtail (besides the color of their tail).  Yellowtail are most abundant in San Diego and Southern California in the summer when the warmer water from down south pushes into the area.  By July and August you can be sure that the water is warm enough to attract the seasonal schools of fish. 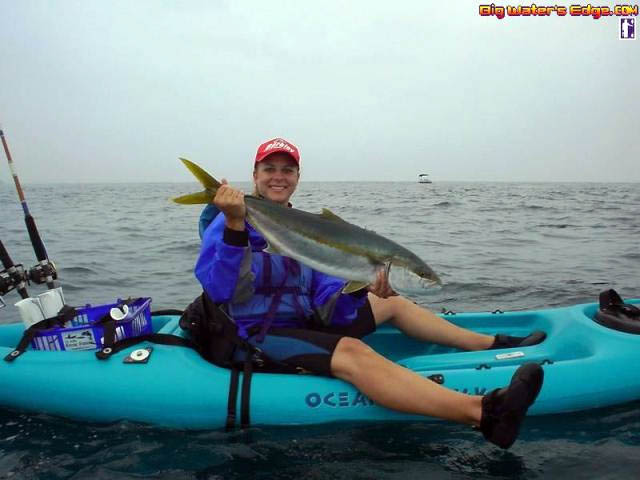 Yellowtail are an interesting species in that they populate both inshore areas as well as offshore banks.  Few other species have such a broad range of environments in which they not only survive, but thrive in.  During the fall and winter when the water cools down, the schools of yellowtail which are normally smaller sized fish (10 to 25lbs) retreat south with the warm water, but some bigger fish have been known to claim deepwater spots all year long.  These brutes are referred to as “home guards”.  Drop an intimidating looking iron near their favorite rock and you’ll find out why.

Most often seen in schools, yellowtail will commonly plow through a school of bait on the surface with their backs out of the water, almost like a pod of dolphins.  Usually three to ten at a time can be seen all ripping through the surface in the same direction.  During certain conditions they will also wallow around on the surface almost in a sleep state.  Kayak fishermen have snuck up on these “puddling” yellowtail with their dorsal and tail fins sticking out of the water, almost close enough to whack with a paddle.  Getting them to bite in this state can prove incredibly difficult, but not impossible.

So the most common practice for hooking yellowtail would be focusing on those schooling fish during the summer that are cruising the upper level of the water column looking for bait fish to annihilate.  To do this kayak fishermen catch live mackerel using a sabiki rig and keep them alive in some type of bait tank, either electrical or otherwise.  A main line of 50 or 65lb spectra is often used for its ability to cut through kelp should a fish get wrapped up, as well as its lack of stretch and sensitivity.  The drawback of this braided line is that it is very visible in the water so a leader of 20 to 30lb fluorocarbon is used for the last 4 to 6 feet.  A line to line connection such as a uni to uni knot can be used in order to reel through the guides, or some anglers prefer tying to a swivel for the extra strength.  Ringed hooks allow the bait more freedom of movement and present a more natural offering.  2/0 to 4/0 size ringed hooks are most common, just match hook size to the bait size.  Keep in mind no mackerel is too big so keep some 5/0 or even 7/0 hooks on hand for those 10 to 12” mackerel.  True to its name the flyline rig uses no weight.

A variation of this rig involves a sliding egg sinker of about 2 ounces above the swivel to get the bait down off the surface a little bit.  Either rig, or both at the same time, are used for slow trolling or drifting.  As a rule of thumb place the rod in a rodholder, preferably behind the seat of the kayak and put the reel in freespool (conventional gear is far preferred for its larger drag, line capacity and clicker) and take 20 to 30 paddle strokes total, so 10-15 per side.  Then put the clicker on and leave the reel in freespool.  Continue paddling at about half of regular speed and you have officially slow trolled for yellowtail.  Stop paddling and you have officially drifted for yellowtail.  Once  you get a bite and you hear that clicker screaming, don’t panic.  Take your time, take the rod out of the holder, wait for the fish to take a nice steady run and put the reel in gear.  Most of the time a hookset is not necessary but a small nudge for good measure is okay.  Just be aware that if you’re using spectra 100% of that hookset is transferred to the fish, unlike monofilament which will absorb much of it in the stretch of the line.  Once you have the reel in gear and rod loaded up, then take off the clicker.  This will avoid any unexpected backlashes while trying to thumb the spool and take the clicker off with the fish running in freespool.

To get those finicky puddlers on the surface to bite can be a frustrating experience.  Sometimes they just aren’t eating and that’s all there is to it.  Often their interest will be peaked by a flashy lure or hot bait in front of them but at the moment of truth they’ll veer off the bait and sink out.  Good success has been reported by using soft plastic swimbaits such as Big Hammer swimbaits in this situation.  A leadhead heavy enough to cast but light enough to stay on the surface with a medium retrieve is ideal.  1 to 1.5oz should be adequate.  This technique requires accurate casting in front of the fish so that you can run the swimbait right in front of their nose.  Choose swimbait colors that simulate mackerel or bait fish and give it a try with other lures such as surface irons, Krocodiles or even live mackerel if they want nothing to do with the swimbaits that day. 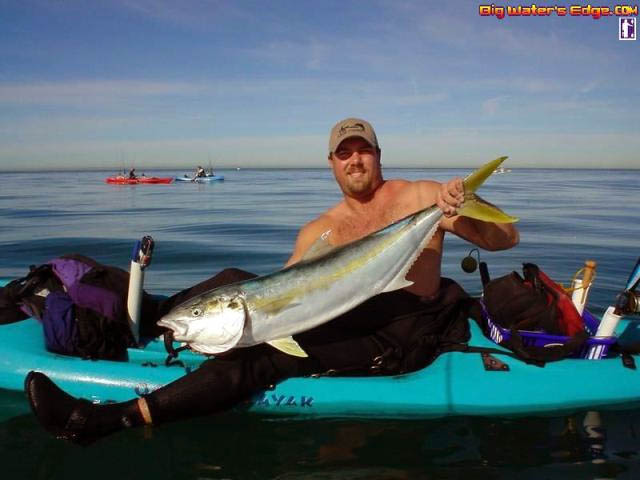 Those home guard yellowtail that stick around all year long are what strike fear in the hearts of light line anglers and spinning reel owners.  These are big, strong fish that don’t want to leave their rock.  Routinely reaching sizes over 30lbs they mean business.  It may take some time to find their secret spot but once found you can amaze your friends with extra large size yellowtail in the dead of December.  The specialty technique for these fish is called yo-yo iron.  Take a heavy iron such as a Salas 6x or 6x Jr. and simply drop it to the bottom and reel it back up at a quick pace, and repeat.  Eat your wheaties in the morning because this makes for an arm burning day.  Variations of the yo-yo technique would be stopping halfway up and dropping back down, or casting out and taking 20 or 30 cranks before dropping back down.  Use heavy gear, at least 30lb preferably 40 and a powerful rod.  Usually the bite will come at or near the bottom but be prepared the entire way up as sometimes the fish will follow it for awhile or you’ll come across a mid-water bonus.

With time on the water and an understanding of how yellowtail operate, these fish will definitely increase your addiction to the sport.  There is not much that compares to that bend in the rod and slow and steady sleigh ride that yellowtail are capable of.  Remember to bring a gaff for the big guys and if the freezer’s full toss those 10lbers back for another season.