The launching and landings have been the highlights of many of my slower morning fishing sessions.  Paddling furiously out as a blackened wall rolls toward me in the predawn, going up and over with a loud slapping of the bow as I land on the backside and the roaring breaking wave just behind me will always cause me to belt out a victory cry. Riding in a wave and casually stepping out onto the sand of a summer crowded beach will likely have me strutting with a cocky smile all the way to my truck. This is not to say that the surf has not humbled me on more occasions than I would care to admit, but just as time on the water leads to better catches, time spent in the surf leads to proficiency in launching and landing. 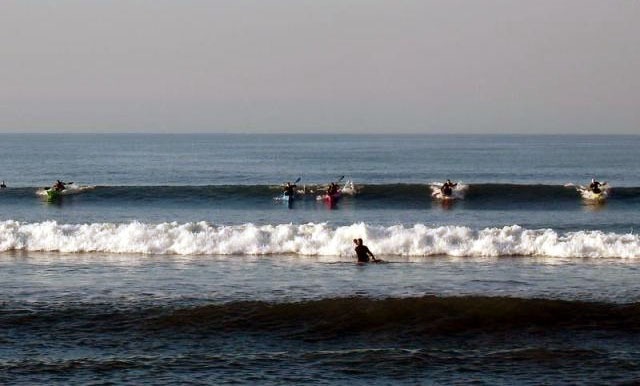 Throughout the span of my fishing from a kayak I have thought that I really should just play in the surf on my kayak. Leave all the rods and gear and just gain some confidence and find my kayak limitations as well as my own. Fishing time being so precious, I just could never seem to find the time, until recently. Now that I have experienced being propelled at surprising speed across the glassy blue green waters surface, I feel I have definitely been missing out on another form of kayaking adventure. I hope that this newly found passion will carry over into my kayak fishing, lessoning my limitations allowing for greater accessibility to more difficult launches and landings.

Having played in the surf with a kayak designed specifically for this application has made it very clear that I can’t expect to duplicate the same maneuverability with my fourteen foot loaded fishing kayak, but some things certainly seem to hold true to any kayak.

Prior to launching, most kayakers are observing the surf intervals, as they are making ready. I have had several mornings where I have thought, that I wish I had launched just then through that lull or on the other hand, have been glad I had not launched through that roaring set. Paying attention to the timing of bigger set waves can give you a much better shot at getting out without getting a face full of water or worse getting tossed back on to the beach.

Once you commit to paddling out you cannot hesitate. Forward momentum is crucial or you may end up surfing that wave in reverse ending in a surprising yard sale of all that as not lashed down or stowed in your kayak. Keeping perpendicular to each wave is also key to not having the force of a wave roll you over sideways.  Remember as well that those roaring big set waves will often break considerably farther out.  Give yourself plenty of room once outside, before patting your self on the back or waiting for your fishing partner to catch up.

Most will agree that landing unscathed in larger surf is much more difficult than the launching through comparable  conditions. Most beaches breaking waves change dramatically with the height of the tide. Usually fishing sessions will have opposite ends of the tidal swing to deal with as well as sometimes building ground and wind generated swells. Patience is key to picking your time to roll in. Just as you spent the time while rigging to launch, observing the timing of the ones to avoid will aid in finding your opening.

After finding the lull I paddle in to the edge of where the smaller waves are breaking and pick a small one to surf. These waves usually don’t have the energy to carry me, so I paddle hard to stay on it. If it does gain energy and I find myself slipping down it too fast I put a leg over the side or straddle both legs and lean back to keep the nose up. If I do fall off the next breaking wave will quickly push me sideways and I will lean into the breaking wave with my paddle flat on it and lean hard on it. One thing I have learned is where I lean will affect how that bumpy ride in will end. Leaning forward will have you end up facing the next wave. Placing the braced paddle slightly behind you will keep the bow pointed toward the beach and makes for a much more controlled landing. 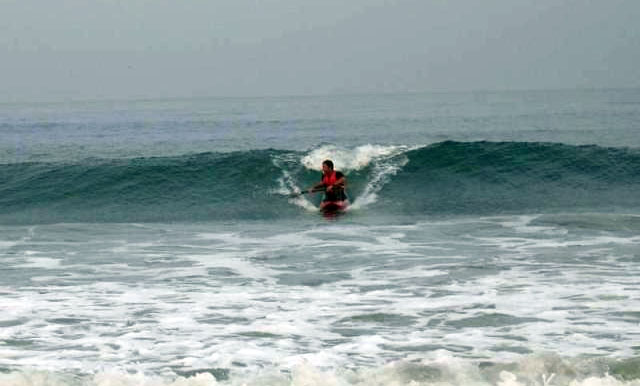 Long interval surf can also allow you to just follow in a wave. You want to fall off the back of this wave and then paddle hard straight in to the beach. If at all possible positioning any weight that you can as far to the rear of your kayak will aid in its ability to successfully ride a wave in.

None of us can possibly know our limitations without crossing over that line every so often. Lessons learned can be much less painful if nothing is lost or broken. The time taken to stow ones rods below or leash everything above can take the sting out of getting caught inside of an unexpected pummeling wave. This is something that each and everyone should decide on every given day when observing the conditions in front of us.

I have learned from my past mistakes, some of which ended in broken or lost rods and reels full of sand. I still am humbled periodically by the surf, but seem to have learned enough to have not lost or broken anything in the surf for several years. There have been way too many donations to the sea by those new to the kayak fishing scene. Don’t be another with a bad ending of what would have been another great day on the water.