It’s Friday evening in mid June and the air is thick with excitement about the next two days of fishing. This is not about that early morning frog bite or the flipped jig getting smashed next to a bush by a bass, this about heading off the Southern California coast 60 miles to San Clemente Island aboard the Islander sport fishing vessel with your kayak and going after Calico Bass, Halibut, White Seabass, and Yellowtail.

We start the trip out by loading the 85 foot Islander with 21 kayaks on a special rack and on the deck. Once everyone is on board we head out to the bait barge to pick up bait for those wanting to target Halibut, White Seabass and Yellowtail. The few anglers on the trip that target Calico bass usually will pass on the bait and go straight for the artificial lures. After getting your gear situated and rods rigged it is off to the staterooms to get some sleep if you can.

The Islander departed around 8pm and made the 60 mile journey to arrive at San Clemente Island at grey light. The energy on board builds as the anticipation of what the days fishing will bring. You have the option to have a full breakfast or grab a quick bite and get in the water to start fishing. I always choose the ladder which happened to be a banana!

On this trip we started day 1 fishing on What is called the “Front Side” of the island. This side of the island is the most protected from the conditions as we experienced on the first morning. Fishing was tough as we still had winds up to 15mph up until about 11AM. There were a few Calico Bass caught and a mix of rockfish. After hearing reports by other boat captains at the island, the skipper decided to move the Islander around towards China Point on the west end of the island. After the quick trip and a very tasty lunch, always good on these trips as is the rest of the meals, it was off the boat to try and catch some fish.

Many of the anglers loaded up with bait and went chasing the Yellowtail that were in the area. There were a few that headed in towards the shore in pursuit of the Calico Bass. The first days afternoon session resulted in catches of Yellowtail to 32 pounds and Calico Bass up to 8 pounds. This was a great first day and we were looking for more of the same on day 2 as the weather was to improve and we were able to catch some squid to use for bait. 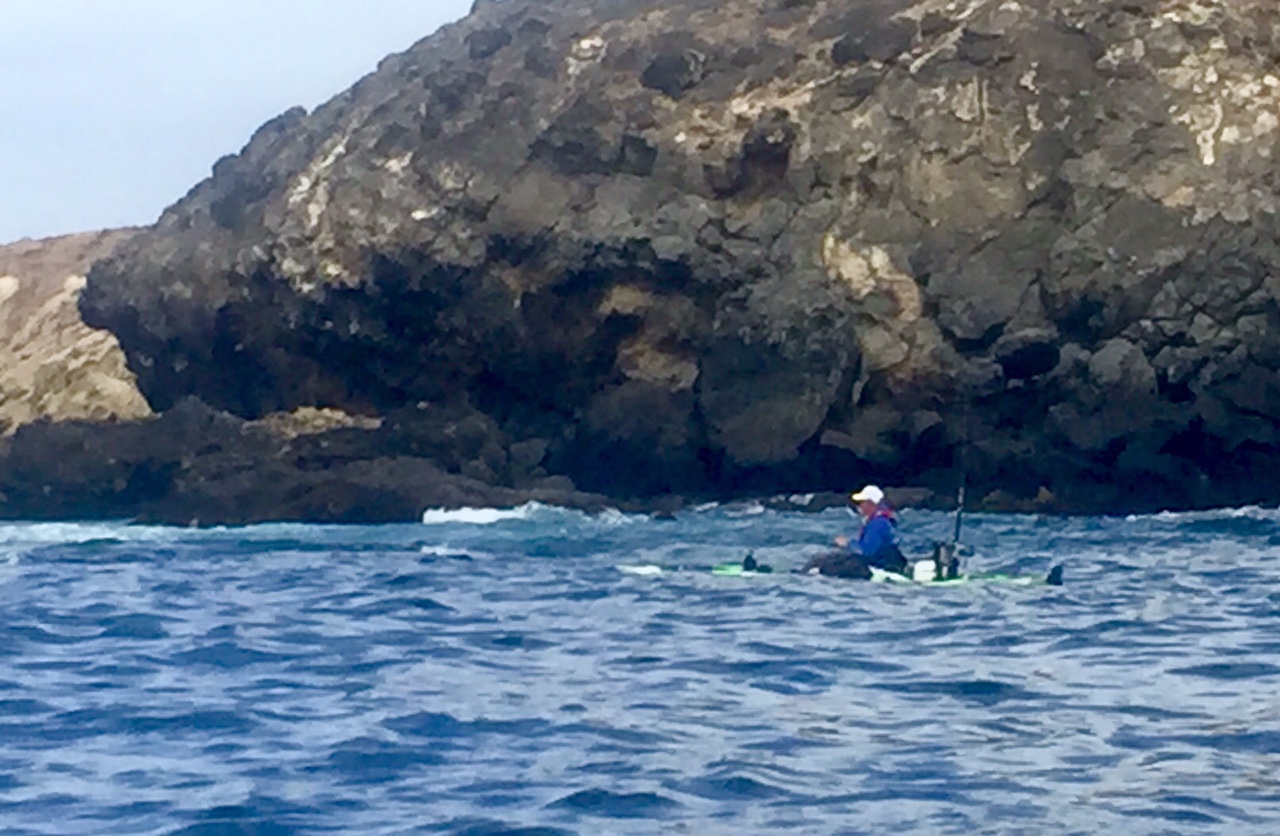 After securing your gear and making any adjustments to your tackle for day 2, it was off to get cleaned up with a nice hot shower and relax with friends before dinner. Dinner was excellent followed by a delicious dessert. Relaxed and full, it was time to retire for the night with some needed rest for day 2.

With a good bite on the Yellowtail the day before the captain stays put and gets most anglers in the water. A few decided to stay on board as the captain was to make a short move closer to the Calico bass areas. Before the move the captain was off in the skiff trying to assist an angler with catching a Yellowtail that caught the interest of a seal. After a long battle the Yellowtail was finally brought on board but not after the seal had a few bites. This fish would have weighed about 30 pounds if not for the hungry opportunistic seal. 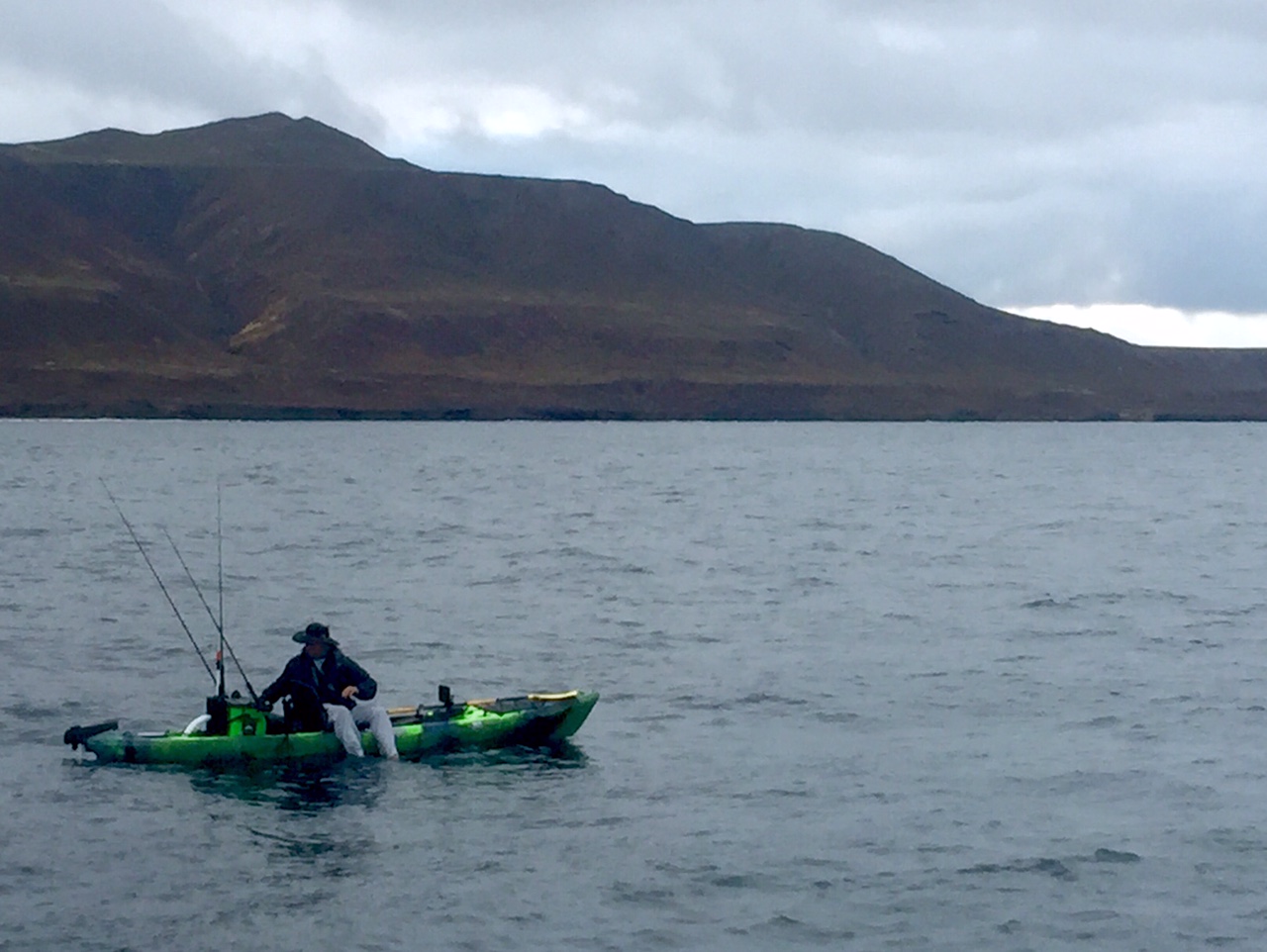 After the morning of fishing the Calico Bass seemed to be the star as fish were caught up to 7.5 pounds. Yellowtail and a few halibut were caught but were proving to be a little elusive. While onboard eating lunch a load roar broke the calm as two F-18’s performed a low altitude fly by as part of their training that is done out on this island for the US Navy. They flew around making their attack runs on targets set up on the island for about 15 minutes. This was an awesome sight!

Off the Islander we go for the afternoon session. With the lines checked, retied, and the tackle adjusted the Calicos don’t stand a chance and many still in pursuit of the Yellowtail. There was more of the same for the Calico Bass with the fish biting for the rest of the afternoon. The Yellowtail proved to be elusive as many paddled in different directions looking for them. There were a few more Yellowtail and Halibut caught on this final afternoon at the island. In total the biggest fish was a 32 pound Yellowtail, 16 pound Halibut, and an 8 pound Calico Bass.

Time to break down the gear and get ready to head home. After a wonderful Pork Loin dinner followed by a nice helping of Cheesecake, the captain set course for home. After some fish tales it was off to sleep and start dreaming about the next mothership trip abroad the Islander! 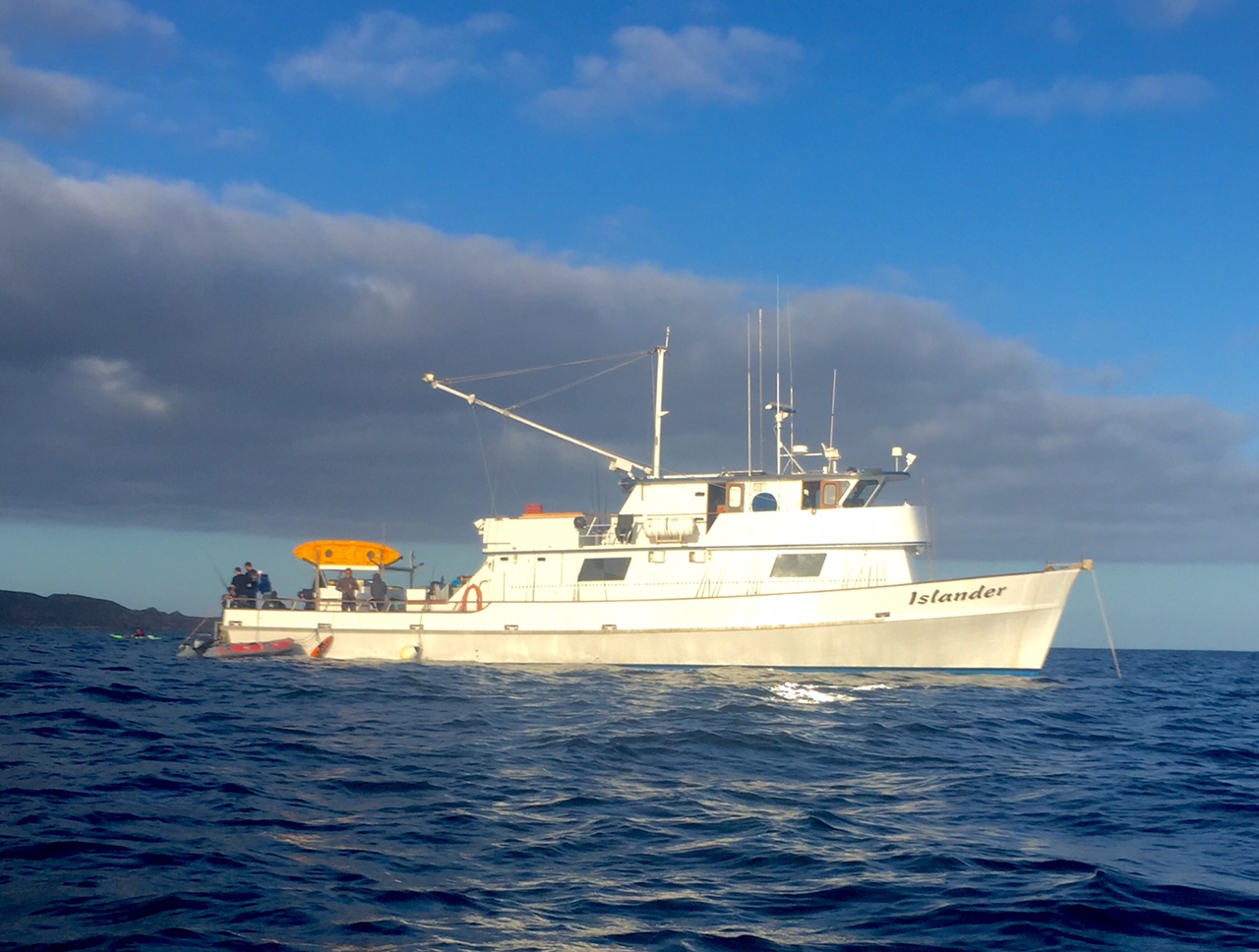 After arriving back at the dock, the Islander crew worked fluidly to get all of the kayaks and gear unloaded. This is a top notch crew and did a very good job especially with loading and unloading 21 kayak over a three day period. You owe it to yourself to make it out on one of these mothership trips aboard the Islander to a truly special place in San Clemente Island.