On most weekdays one could expect to find the beach prior to dawn typically void of another soul, other than perhaps an ambitious jogger on a quick run before heading to work. This particular weekday morning in early April, when my tires hit the sand, I am greeted by a dozen trucks on the beach, kayaks unloaded, rigging up by the light of a flashlight or headlamp. This morning’s ankle slapping surf is typical and the paddle through the reserve to prime fishing grounds is a quick and easy venture, but there is more than that drawing these early risers. As much as some would like it kept quiet, the word is out. An impressive catch or two is all it takes, everyone wants their fifty pieces of silver, or is that fifty pounds of the silver-sided white seabass (WSB)? 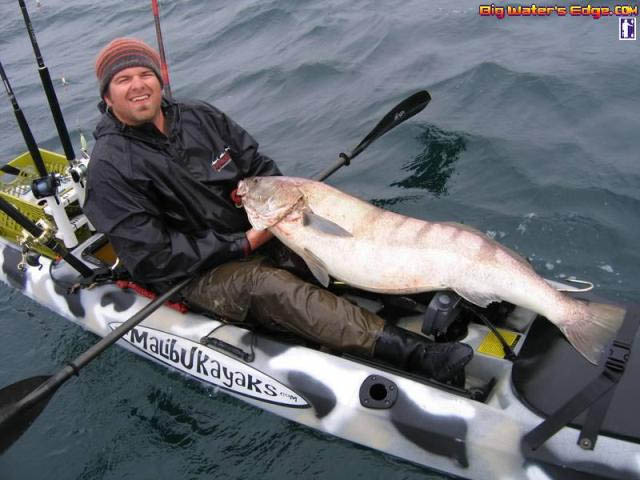 While Catalina and the Channel Islands to the north rely heavily on live Squid to bag the giant croakers. Unique to La Jolla and some lesser-known So-Cal locations is how readily white seabass strike fin baits, mackerel in particular. Also unique is that a very large percentage of the catch is taken from kayaks. It has been speculated that the nearly silent movement of the kayak does not spook these wary fish and that slow trolling presents live bait more naturally. These are crucial keys in finding success. Throw in a handful of patience and just a dash of luck and you may be the happy paddler heading in with a heavy load.

The most common method for targeting local white seabass starts with making bait. Jigging a sabiki rig with a 1-2 oz. torpedo sinker usually yields good results. Bait congregates near structure such as piers, pilings jetties and kelp beds. Look for coves or pockets along the kelp edge. Bait usually congregates around the thermocline, in spring that is usually 10-15 feet down. Spanish mackerel are the most abundant bait and work very well. The greenback mackerel although less abundant arouses more confidence as bait, perhaps the Greenback’s erratic and lively swimming make it more easily noticed by its prey.  Sometimes Sardines can be caught, usually casting at a surfacing school. Unfortunately Sardines don't fare as well in some smaller tanks with inadequate flow, but a lively one is not likely to be ignored.

Tackle is somewhat of a personal preference. Heavier line and a stouter rod may help turn the bigger fish that are prone to head for the kelp, but lighter line and a soft tipped rod absorbs the headshakes and may keep the hook from tearing out of the croaker’s soft mouth. A good compromise is using spectra. A lighter tipped rod and few feet of mono leader will help aid in absorbing headshakes, fluorocarbon has less stretch capabilities and is not recommended for this application. Circles hooks and live bait hooks are both used although when targeting this species the latter seems to have a greater following. Bait is usually fly lined, nose hooked, and slow trolled on a long line and periodically soaked. If you choose to run a second line it should be run shorter or weighted to avoid tangles. Variety is a good idea and can help you cover more area. 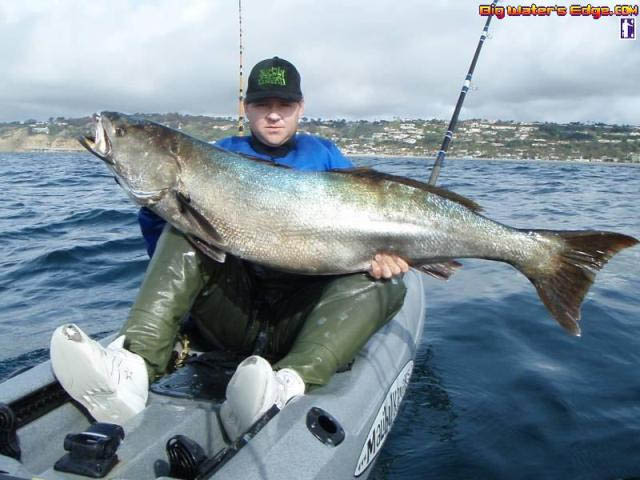 Live bait seems to work best, but bigger Fish Traps can be trolled and cast along the kelp as well as Krocodiles and Irons in Mackerel patterns. Trolling Rapala CD14s or 18s or Yozuri Hydro-Mags can also produce results. Throughout the years I have caught white seabass on all of the artificials mentioned; yet live bait has accounted for more than all these methods combined.

Not an incredibly fast swimmer, WSB rely on ambushing bait along the kelp or using its lateral line in low visibility water and also being opportunistic with its prey. The pelagic red crab is an easy meal and in past seasons their influx greatly contributed to the amount of WSB that congregated along La Jolla. This coincided with spectacular fishing. As the current sweeps the Red Crab through the kelp forest, they latch on to the stringers. Divers have told me that the WSB pick them off kelp stringers like tomatoes from the vine.

Although sometimes seen as a nuisance, barracuda are a good sign. Seabass are known to eat smaller barracuda and will feed on the wounded baits the barracuda have slashed. More than once, I have witnessed how a WSB will eat wounded bait that is tossed back out. If you come upon an area holding bait, time can be well spent soaking a Mac, while you toss a F/T or iron. An obvious current slick is another good area to soak your bait or slow troll parallel.  Often holding bait these "roads" harbor wondering game fish as well.

This fish spends most of the time under the kelp canopy most fish are hooked very close to the kelp. Smaller keepers of around 10-20 lbs are often more user friendly, as a whole they tend to run away from the kelp and usually are incapable of running deep enough to get you in trouble. Your biggest threat may be attracting the attention of a Sea lion. The bigger trophies definitely have to be played very close to the limits of your tackle. They seem to have greater survival instincts, running headlong into the kelp and I’ve seen as many lost as I have seen landed. Unlike yellowtail that will wrap you all over in the kelp white seabass tent to charge straight through until exhausted. Patience and quality line can get them out.

When things get crowded out there, finding your own quiet area is a smart bet.  WSB can and often are caught well off the kelp along the ridge that drops into the La Jolla canyon. If using a meter following the 150 foot contour running East to West can do the job and when you hook up out there, unless there are lobster buoy lines to contend with, you have nothing but time. Other areas to try are coves with sandy beaches especially around grunion runs on the new and full moon. 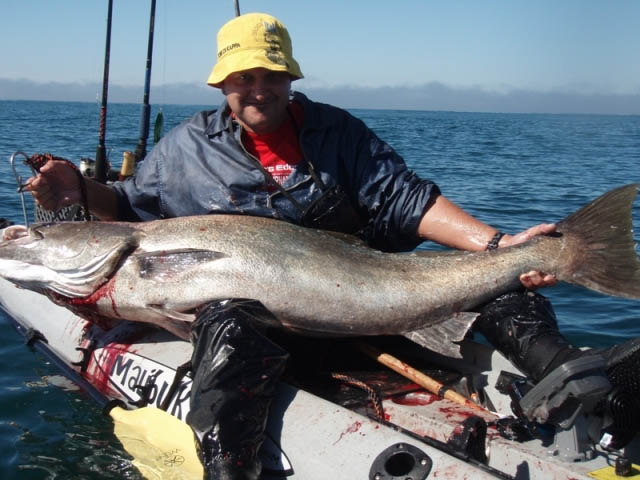 The presence of these spectacular and prized fish will certainly tempt the inexperienced to venture out. Know your bag limits as well as your physical limitations pertaining to your experience. You can run into trouble even before you have cleared the surf zone. Never go alone and try to go with someone who is experienced. If you don't know anyone, consider hiring a guide, it is money well spent. Jim Sammons of La Jolla Kayak Fishing, the local authority, will show you a day to remember.

With early reports and scattered stories of success, it would appear that another epic season is just getting underway. Typical water temperatures should have April through mid-May providing the most success, but the big croakers should continue to bite throughout the summer months. Hopefully this will leave you with but one question: To grill or not to grill?